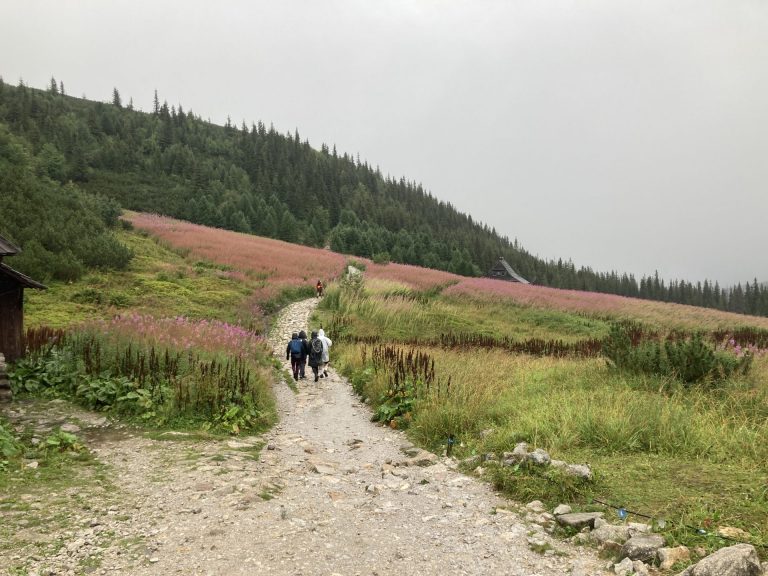 “You did not make me closed; You did not quite close me. Loneliness is not at the bottom of my being at all; it grows at a certain point. The fissure through which You enter is far deeper. You enter — and slowly begin to shape me.” Radiation of fatherhood, Karol Wojtyła, 1964 Mountains are a special place. There is beautiful nature, wonderful landscapes and silence. It is a great place for a summer holiday. However, mountains are also full of unpredictability – unexpected weather, change of conditions on the chosen route, and it brings us to the edge of one’s own physical and psychological possibilities. Mountains face us as humans with the truth – about ourselves, about relationships with others and about our relationship with God. Therefore, the fides et cultura 2020 team decided to organize a summer trip in the Polish Tatras mountains, in Małe Ciche, following the footsteps of our main patron – Pope John Paul II. According to our initial idea, the trip was international – a group of young people from Poland, Germany, England, France, Croatia and even India, decided to share their time with one another.

A basic foundation of the trip was the spiritual and philosophical program focused on the figure of the Polish pope. Daily celebration of the Holy Mass and reflecting on the drama “Radiation of Fatherhood” written by then, the bishop Wojtyla. It was used to give the participants an impulse for personal reflection on the basic existential matters. Examples of topics that were embraced in the drama: Constant tension between love and suffering; character of the human loneliness confronted with the divine omnipresence; nature of a human as a being which is not “closed” and the question of freedom in the context of God’s plan for each one of us. These topics were analyzed during long evenings that were the continuation of conversations had durin the hiking expeditions, ie philosophical mountains par excellence.

Moreover, the thoughts following these discussions were mostly related to personal relationships with God the Father, vocation, trusting oneself and their plans in God and the definition of love. Together we were analyzing what it means to be a man, to be a woman, fatherhood and motherhood, as well as the cross and suffering. We were also contemplating the conclusion of the drama “the heritage of all men, implanted in the Bridegroom’s death” and the question of how do we cope with this heritage. Together we were hiking, swimming, sightseeing Zakopane and its nearest area and in the evenings we were singing and drinking wine. We also had a trip to Wadowice, where we had a chance to dive into the history of John Paul II’s vocation. From Wadowice we went to Krakow to spend the evening in a Jewish restaurant, enjoying traditional Jewish cuisine and listening to a Klezmer music concert. Both cities were a must to see considering the theme
of the whole trip. To sum up, this holiday did not only allow us to relax in an active way, but also to have a closer look at our lives through faith, letting God into our life through the significant fissure, that is to let him “slowly begin to shape me [us]”. As Wojtyla addressed God through the lips of the drama’s character “You are never against me [us]”. At the end we can say that our trip has included something from a scout camp, something from a pilgrimage, but most importantly, it was a handful of community experience, mutual respect, happiness and a touch of what is the Radiation of Fatherhood.